MARATHON LEGEND
One of the most significant personalities in the history of world sport. He took part in 15 marathons, two of which he did not complete due to injury, and only one of which saw him beaten (1963 – Boston – 2h24m43s – 5th place). He became double Olympic marathon winner with the best times in the world. In 1969 a serious automobile accident confined him to a wheelchair, but even then he did not turn his back on sport, but went on to take part in competitions for the physically disabled. In 1987 at the 75th anniversary of the founding of the IAAF he was adjudged to be the best marathon runner of all time. He died on 25 Oct. 1973. 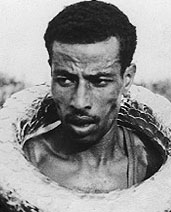