SEVEN TIMES IN THE TOP 10
A confectioner by trade, he ran his first marathon in 1961 at Úpice (the Ratibořický Marathon), winning in a time of 2h19m15s, which was the world’s best time in that year. In 1964 he came third on the Windsor – Chiswick course, with a personal best time of 2h15m26s. Václav Chudomel was a regular participant in the KPM. Between 1961 and 1971 he was applauded ten times over the finishing line, appearing three times on the winners’ podium and finishing another four times among the top ten. 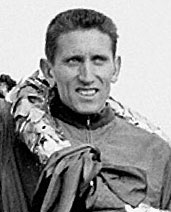