HUNGARIAN MARATHON PERSONALITY
An upholsterer by trade and later trainer, he achieved his first successes in 1960 at the Hungarian national championships in Szeged, where he was second over 10000 m and third over 3000 m. He held the Hungarian marathon record twice, achieving his best time of 2h14m59s in 1968. After finishing his active running career he decided to go on training young runners. He died on 2 Nov. 2006. 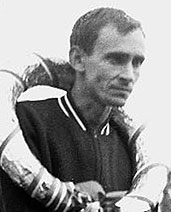