BORN IN KOSICE
Born in Kosice. Initially a member of the club AŠK Dukla Banská Bystrica, he moved to AK Kroměříž in 2004. His first races were on shorter courses. In the 1994 European Championships he finished in 4th place in the 10 000 m heats with a time of 28m08.02s.His personal best time of 2h09m53s in London in 1998 is the best ever Slovak performance.He has taken part several times in the World Cross-country and Half-marathon Championships. Since 1994 he has been champion of the Czech Republic several times in the 10 000 m track race, the 10 km road race, in the half marathon and the full marathon. 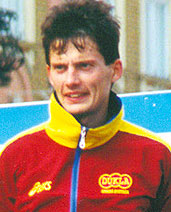