VICTORY AND A NEW COURSE RECORD
Born Alena Pavlíková she is a teacher by profession. Her winning time in the 1989 KPM set the women’s course record, which has not been surpassed to this date.The 1994 marathon result in Boston was her personal best time, and she was also the holder of the Czechoslovakian record over 25 000 m with a time of 1h25m55s (1989). She was 13 times champion of the Czech Republic in the 10 000 m track race, the 10 km road race, the half marathon and the full marathon. In 1992, 1994 and 1998 she took part in the World Half-marathon Championships. She took part in 38 marathons altogether, 29 of which she completed and 12 of which she won. She has returned to Kosice in 2010 to celebrate 30 years from the first start of women on the marathon in Kosice in 1980. She ran a relay race 4 x ¼ marathon in a team named Legends with Šárka Balcarová (winner in 1980), ľudmila Melicherová (1994) and Katarína Jedináková (1999). 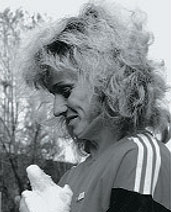