LONG-LIFE MARATHONER
The first time he ran in Košice was in 1945, when he finished third with a time of 2h56m05s. Altogether he completed 223 marathons. He set his personal best time (2h35m14s) in Ostrava in 1959. He was remarkable for his very consistent performances – in his ten fastest marathons he achieved an average of 2h37m53s. He produced the 17 best performances in the world in the Veterans’ class. He died in August 2004. 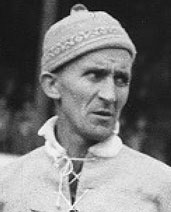