FIRST TIME UNDER 2:30
In 1952 he won the qualifications for Finnish runners with a time of 2h29m02s. He became the first runner to achieve a time below 2h30m in the KPM. Just as in 1952, in 1954 he set another new course record, and in both cases he was entered in the list of best performances achieved within the former Czechoslovakia.He died on 22 Dec. 2008 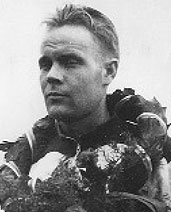