MAN WITH PRECISE STATISTICS
He was the only marathoner taking part for Czechoslovakia in the 1954 European Championships in Berne, where he took 13th place in 2h36m41.4s. In his active running career he completed one thousand long-distance races, 98 of them full marathons, and he ran a total distance of 195 740 km. After finishing his sporting career he started concentrating on training young people, and he organized several important running races. From 1963 to 1979 he chaired the Marathon Committee of the Czechoslovakian Physical Education Central Athletics Association. 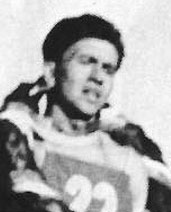