VICTORY AT THE SEVENTH ATTEMPT
He was a construction engineer by profession. In 1976 he achieved a time of 2h13m44s in qualification, but even that was not good enough for the Olympics. Four years later he had improved to 2h11m56s. He took the victory in the KPM when taking part for the seventh time. He took part in the KPM for the last time in 1982, finishing in 5th place with a time of 2h19m28s. 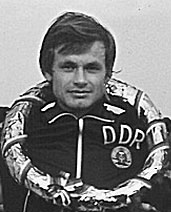