QUEEN OF THE MARATHON IN KOSICE
Born Christa Kofferschläger she is a bookkeeper by profession. She first took part in the KPM in 1981, winning with a time of 2h37m46s.In the 1985 KPM she finished second with a time of 2h41m18s. She won in Košice five times altogether (1981, 1984, 1986, 1987, 1988) and finished second on one occasion, a performance which no other runner in the KPM has equalled. In addition, she also ran the half marathon in Košice several times, winning in 1995 and 1996. 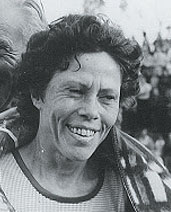